Prior to Karen and Martin’s acquisition of the property in 2006 it was purchased in 1985 by Andrew & Vivienne McCutcheon.

In 1991 the McCutcheon’s sought advice from many of the early Mornington Peninsula wine pioneers and viticultural consultant Ian Macrae.

Macrae advised that the property was eminently suitable for grape growing, and advised that they get soil tests, and consider planting some 15 acres. In 1992 they commenced work on dams, water storage, irrigation systems, vineyard layout and earth works, completing initial planting in the spring of 1992.

1995 saw the first crop and the first wines being produced under Dromana and Stonier labels. Small amounts of wine were also made by Vivienne and Andrew under the Peninsula Ridge label until 1999 when Ten Minutes by Tractor was formed. The original Ten Minutes by Tractor cellar door was on the McCutcheon Vineyard until the new restaurant and cellar door opened just around the corner in 2006. 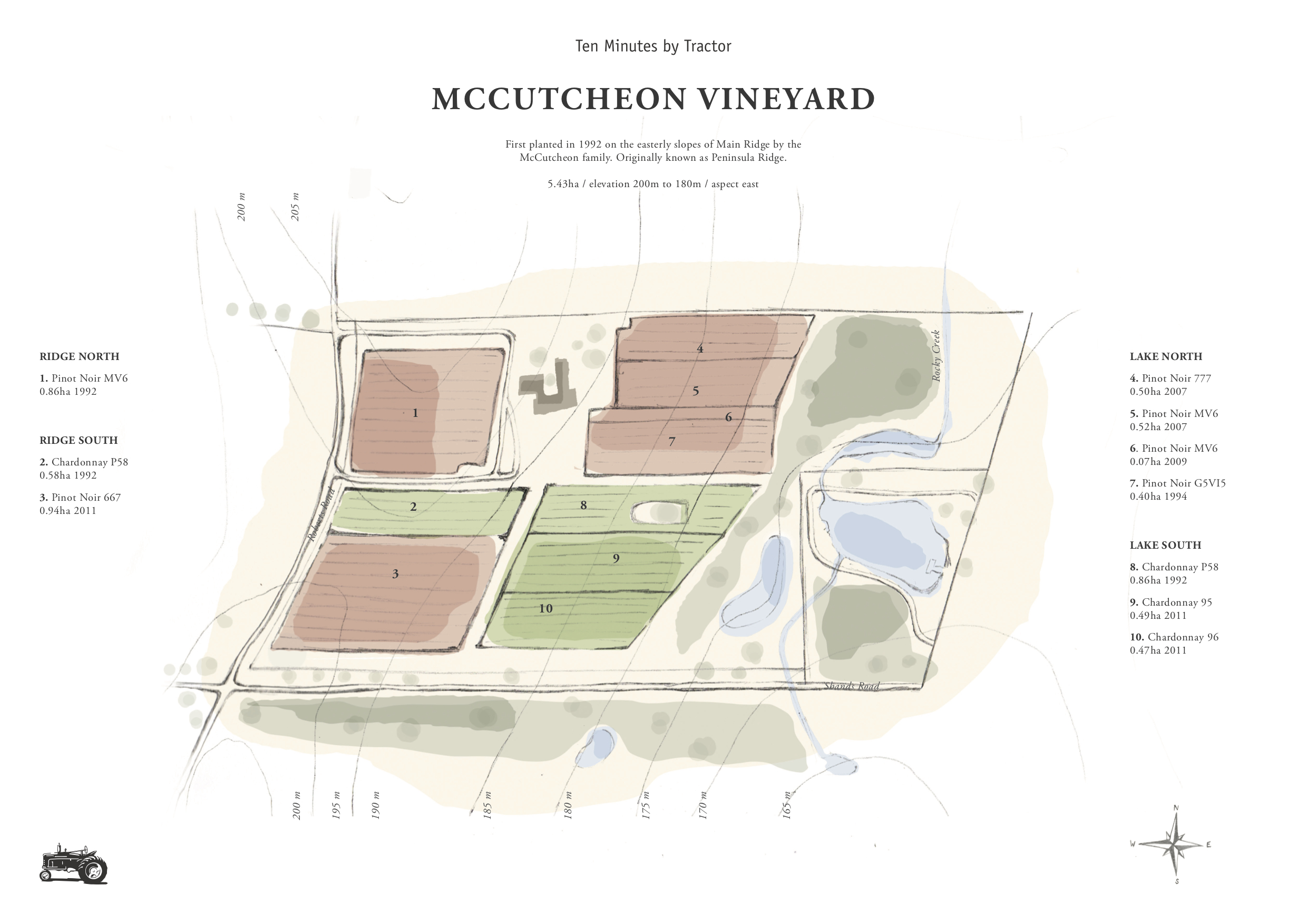 Rocky Creek, on the eastern boundary, runs through almost 0.5 hectare of wetland, a lily pond and an irrigation dam; it runs into Main Creek at Barkers Road and Main Creek eventually flows into Bass Strait at Bushranger Bay.

Due east. The easterly fall of this vineyard offers perfect gentle warming of the soil from sunrise through to the late afternoon. During the day the vines receive very good light without the intense heat which keeps the fruit cooler during the growing and ripening season. This leads to more elegant flavours with greater structure and finer tannins than the Judd and Wallis vineyards in most years.

In total a 26m vertical fall over a horizontal distance of 305m, however, on average, the western one third is level and almost all the fall is in the eastern two thirds of the property, and in this two thirds the slope is 1 in 12 or about 5°.

All the vine rows run down the slope, orientated east to west. This facilitates drainage down the slope, orientates the rows perpendicular to the strongest of the prevailing winds (north and south to south-west), reduces the impact of any intense heatwave bursts (the hottest afternoon sun from the west has less impact than on west facing rows, ie those running north-south), achieves the longest and most efficient row length and is safest for any tractor operations.

Exposed to easterly and westerly winds, protected from south west winds. The lower zone is exposed to northerly winds, and therefore can experience some drying out and evaporation during summer, though as at the Judd vineyard the lower soils are slightly more fertile than those higher in the vineyard because of water drainage down the slope (although the elevation here relative to the lower lakes and seasonal creek keep the vines out of the water table and drier).

Taking Pinot Noir harvest dates from our reference blocks as a proxy for temperature, Coolart Road is our warmest vineyard followed by Wallis then Judd and McCutcheon. This we would expect – Coolart Road is the lowest followed by Wallis then Judd and McCutcheon is the highest. And of course it is never that simple, there are specifics in each reference vineyard that effect the averages…

The soils here are the red ferrosols common to the Main Ridge sub-region.

The top soil, classed as a silty clay loam, runs to a depth of about 20-30cm over these red ferrosols. It suffers little from compaction and is generally well aerated, with excellent drainage and no water logging.

The upper zone of the vineyard has thinner topsoil and dries out faster than the lower zone. In addition, water drains to the east, along the vine rows, with land contours and slowly seeps into the lower zone creating higher soil moisture content with associated higher vigour and higher yields.

These are very broad soil classifications and we are continuing to investigate the more specific details in each vineyard, in fact, each block.

Draped across the ridge falling 90% east, 10% west with a fall of less than 4 meters from highest point to lowest point along the vine rows. Its highest point is 201m and lowest 196m; 90% of this block has less than a 2m fall.

Soils are generally thinner on this block with high organic matter (4-5% being regarded as excellent). The soil profile is very consistent throughout this small vineyard area and the vine roots penetrate below 2 meters, well into the deep clay (from soil pit investigations) with good access to sub-soil moisture.

A spring is found at the south eastern corner of the block close to the windmill which has little to no impact on vine performance.

In 2012 the block was split into east and west sections and renamed Lake Block South and Ridge Block South respectively. The poorer performing Chardonnay clones, I10V1 and I10V5, were replaced with 667 clone Pinot Noir and with 95 and 96 clone Chardonnay.

Notes
At the north east corner of the property. Grapes from this block generally find their way into our Estate and 10X Pinot Noir.

As with the Ridge Block North, soils are generally thinner here.